I am here with another Chai With Chaitanya Q/A Session with the author of a Small Places, Matthew Samuels!

I had the chance to read an early proof of the book and I enjoyed myself quite a lot!

For those of you who dont know about this title just yet, here are the deets:

Jamie is a lonely, anxious kid when he has a run-in with a witch in a remote Somerset village. He’s almost forgotten about it thirteen years later when unpredictable storms and earthquakes hit England – and that’s the least of his worries. Suffering from anxiety, terrible flatmates and returning to his family home after his mother is diagnosed with cancer, he’s got a lot on his mind.

But Melusine, the witch of flesh and blood, lures him back with the offer of cold, hard cash in exchange for his help investigating the source of the freak weather; something’s messing with the earth spirit, Gaia, and Mel means to find out who – or what – it is.

As they work together, travelling to the bigoted Seelie Court and the paranoid Unseelie Court, meeting stoned fauns and beer-brewing trolls, Jamie must reconcile his feelings about the witch’s intentions and methods all while handling grief, life admin and one singularly uptight estate agent.

In case you’d like to check out my review, then its here.

1. Hi! Thank you for choosing to do this #ChaiWithChaitanya Q/A session with me! Could you first tell me a little about yourself? And also introduce us to your book…

Hi there! Thanks for having me on your site. I’m Matthew Samuels, a science fiction and fantasy writer based in London, UK. Small Places is my second book, but my first fantasy book – it’s an urban fantasy, set partially in the real world, and partially … not.

In Small Places, we meet Jamie, a mild- mannered researcher who had a childhood encounter with a witch when he lived with his parents in the countryside. Thirteen years later, strange earthquakes and storms beset the country, but it couldn’t be further from Jamie’s mind: his mother is suffering from cancer, and he returns to his childhood home to look after her. Little does he know that he’s about to be drawn back into the world of the witch, Melusine, as she looks for a fantastical cause for the problems affecting the weather.

2. What was the inspiration behind the story? And how long did you take to write it?

After Parasites, which is essentially a sci-fi road trip novel, I’d wanted to write something with a bit more shape. I was on holiday in the New Forest in England, and although I’m not quite sure where or how the inspiration came to me, I started to think about witches, forests and hidden places. The first draft didn’t take long at all – I finished it in about two months, writing the final few words on New Year’s Eve of 2019. I then spent a long time editing it – pretty much a year, before it reached a state where I was really happy with it. There was a fairly significant change to the narrative and flow at one point!

3. We are increasingly seeing a boom in fantasies that are set in urban places. What personally draws you to them?

I think I’ve always been drawn to urban fantasy, so can understand the appeal; the possibility that somewhere, just around the corner, a weirder and more beautiful world may lurk … that’s definitely something to be enticed by and afraid of!

4. Tell us about your favourite fantasy reads! We all love book recommendations!

Wow … where to begin? Like a lot of people, I grew up on the Hobbit and the Chronicles of Narnia, but love all kinds of fantasy. I suspect that Charles de Lint’s work (especially Spiritwalk, Widdershins and Moonheart) had an influence on me, and Clive Barker’s – especially Weaveworld and the Abarat books. I love Steph Swainston’s work, starting with The Year of our War, but also the lyricism of Jan Siegel’s Prospero’s Children and Jacqueline Carey’s Kushiel series. Brandon Sanderson and Jay Kristoff’s work, and Laini Taylor’s Daughter of Smoke and Bone should definitely be mentioned as well! Oh, and a nod to Carol Berg’s Transformation – I don’t think it directly influenced this book, but it’s brilliant.

5. What was that one scene that you you enjoyed writing the most?

I really enjoyed the pacier stuff towards the end; sometimes I get a bit bogged down in set-up, and although I try and write to a plan, it’s easier to write when you’re being driven by the characters and the plot at breakneck speed!

6. The book was not only interesting because it was dark and mysterious but it also had some really funny moments and some wicked humour! Was that intentional?

100%. I didn’t want Melusine to be a traditional Dumbledore / Obi Wan Kenobi; she doesn’t have time for all that. She knows that Jamie will need some help and work, but at the same time, she’s been through the training mill a lot with prior apprentices and would rather avoid it. Alongside that, she’s got some very strong views on people, and a lot of the humour in the book derives from how ridiculous she finds humankind. She had the potential to be quite a dark character, and – having edited the book in the pandemic – I didn’t want it to be too dark, so Merovech was born to lighten things up a bit!

7. If Jaime was supposed to come over to your place to hang out in present day London, what would you ideally do/talk about?

I’d want to know about his adventures to start with, and probably when we could go to the Unseelie Court. Failing that, we’d probably talk about books!

8. What can you tell us about the sequel? Is it too early to ask?

I’ve got perhaps 60% of it planned out, although I’m not quite sure if it’ll be one book or two. Of course, we get to spend more time with Jamie and Mel, and as you’d imagine, the Seelie and Unseelie Courts want to investigate the shadowy organisation behind the problems in the first book. Of course, it’s hard to do that when you’re an orc or an elf, so they need human help…

You can find more about Matthew and his works, here.

Chaitanya is a sworn member of House Lannister and routinely shares his ideas on how to go about bringing a change in the world on all his social media platforms. He is passionate about reading and is a book influencer. He offers book marketing and reviewing service. When he is not hosting his exclusive 'Chai With Chaitanya' interview sessions, he could be found munching on stale pizza and watching a rom-com on Netflix! If socializing and building connections was a sport, Chaitanya would be a gold medalist. You can drop in to discuss, debate or argue about anything with him. All you have to do is to just reach out! View all posts by CHAITANYA SRIVASTAVA

16 thoughts on “In Conversation with Matthew Samuels”

Hi, I am Chaitanya! 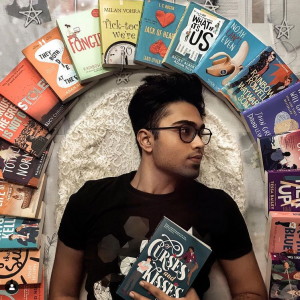 A Pop-Culture Fanatic, Passionate Bathroom Singer, Intersectional Feminist, Protector of the Fantasy & LGBTQIA+ books and an Own Voices advocator!

Head Over to My Bookstagram

Want to Start Bookstagram? Watch this!

Looking for Something? Try Me: